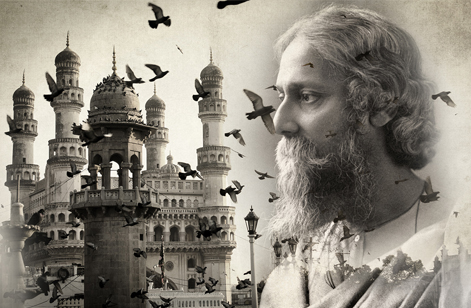 “From the distance thou didst appear
Barricaded in rocky aloofness.
Timidly I crossed the rugged path
To find here all of a sudden
An open invitation in the sky
And friend’s embrace in the air.
In an unknown land, the voice
That seemed even known
Revealed to me a shelter of living intimacy.”

The above lines are from a poem by Rabindranath Tagore (captioned ‘Kohsar’ meaning pure or fresh) , where he expressed how a seemingly rocky and barren landscape revealed the beauty in it and how he wistfully regrets not being able to make Banjara Hills his permanent home.

Banjara Hills has captivated the interest and imagination of poets and princes alike. Even from the times when it was home to tribal (the Banjaras, on whom the hills are named) and panthers that roamed in broad daylight, the beauty and potential was undeniable – with its elevated height overlooking a lake and a panoramic view of the city, and cool winds that blow even in the summers.

Since then however, Banjara Hills has lured the Nizam and his princely courtiers to set up residences here first, followed by the rich and famous down the ages. And today it is known to be one of the most upmarket and sought after residential areas in India.

Recently Signature One opened its door to discerning families right on Road No. 4, Banjara Hills. The development is getting raving reviews for its architectural beauty, landscaping, Club house amenities and its well planned spacious residences. It’s a premium piece of real estate at a premium location for its residents to make an exceptional statement of achievement.